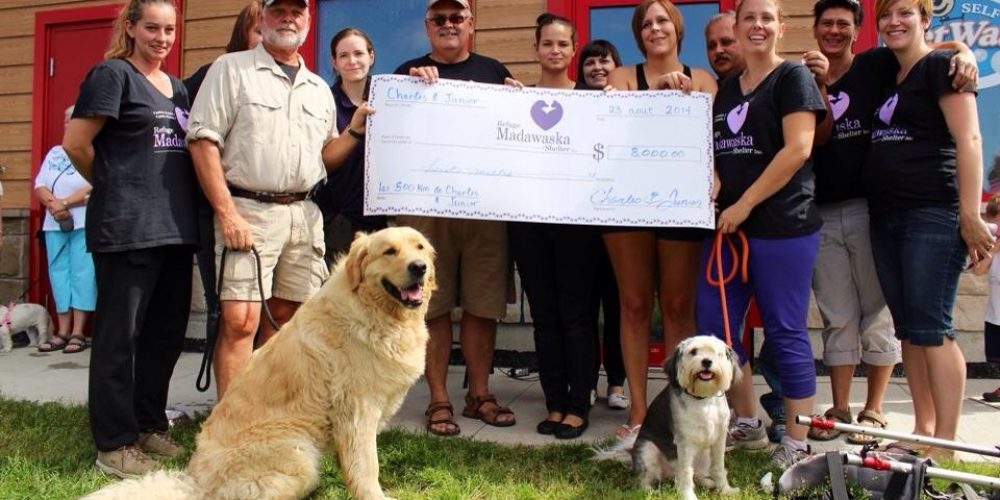 Emotions were high August 23 when Charles Collin and his dog Junior ended their 500 km journey, which started August 4 in Tracadie-Sheila.

This great adventure filled with nice encounters, anecdotes, and generosity was a memorable experience for Charles Collin. The amount raised during the journey was kept secret from Charles by the organizing committee until the very end.

People who attended Charles’ arrival were happily surprised to see that $8,000 were raised by selling paws and collecting money donations. Following the announcement, an additional $1,000 was added to the grand total thanks to an anonymous donator, which brings the total up to $9,000.

The money was  given to the Refuge Madawaska Shelter for the construction project. The Shelter’s Board Chair, Christine Landry, said she couldn’t thank Charles and Junior enough for their accomplishment. “You raised $9,000, but you also raised awareness towards our cause,”, she said.

Pictures of the duo’s adventure are available on Facebook.

Photo contribution of Donald Dufour. In the picture, holding the cheque (left to right), are the organizing committee members: Charles Collin, Catherine Lecomte-Roussel, Nelson Hébert, Isabelle Sirois, and Tina Morin. (absent: Carole Boucher). Along with Christine Landry, Refuge Madawaska Shelter Board Chair and other Board members.